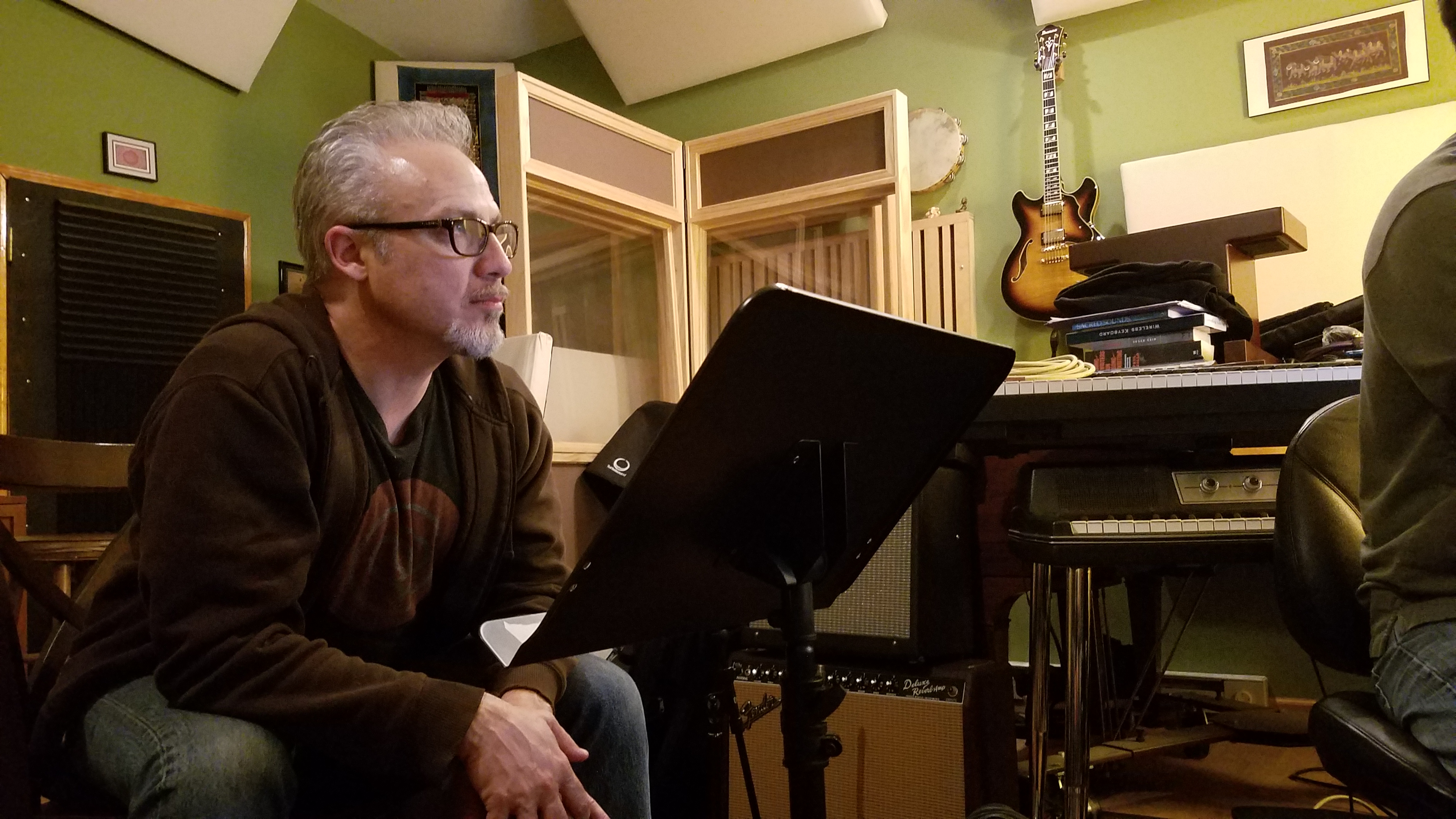 This whole day is a blur to me, but as I recall, FJ is pictured here at the very end of a ten hour session, wherein he laid down muscular, melodic, grooving bass on ten (10!) of my songs.

Fj and I play together pretty often, but a couple of these songs had morphed a bit in the studio. The man zigged right along with the new arrangements and made them whole.

He grinned through every take, until time to listen back. Then he looked like this.

River Guerguerian nails The Quiet Part with the loud part 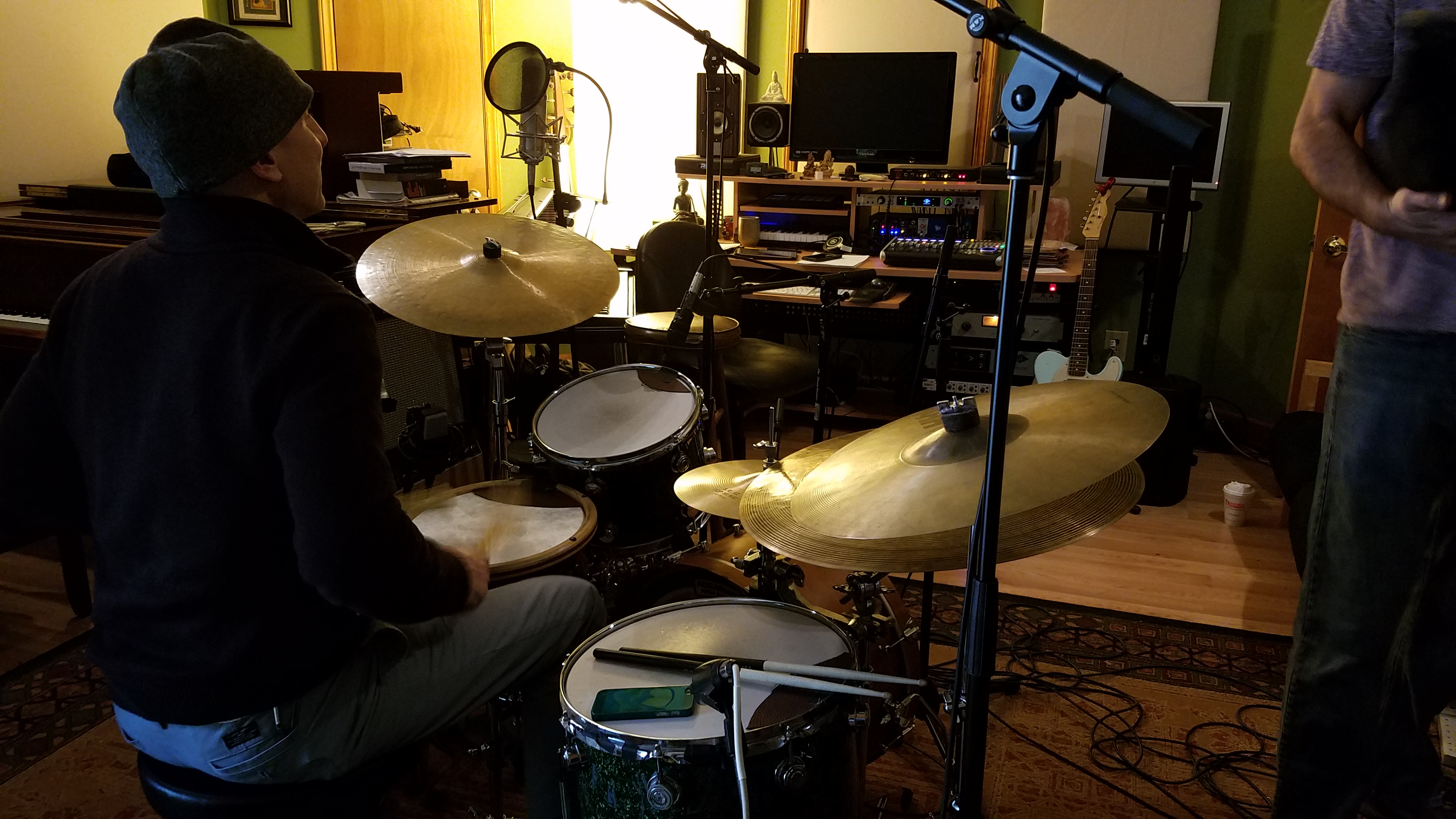 Early December 2017: Three days to go before the album sessions and I hadn’t settled on an arrangement for “The Quiet Part”. I knew the song had to start off, um, quiet and build and drop a couple times, but in my head it sounded both soft and top heavy.

Hey, what if we did that?

I should have figured River Guerguerian would know exactly what I was after: “You want side stick on this?”

And he played “The Quiet Part” just like Al Jackson, Jr. 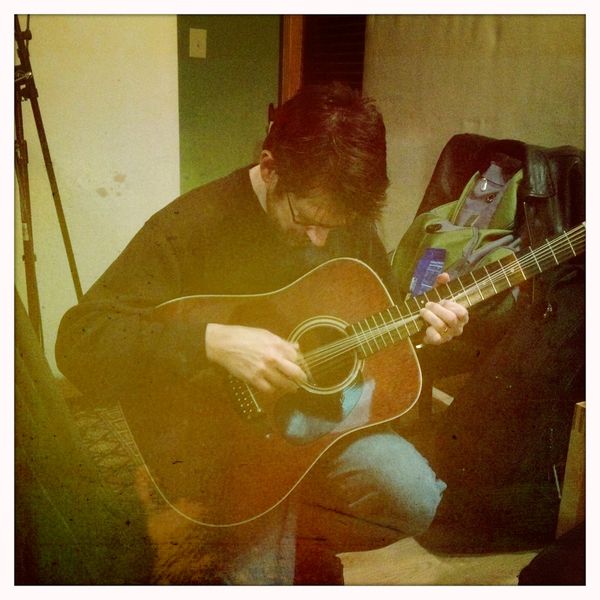 David Brenner used to joke about working at the fair and how every time he dropped the bar to lock someone into the roller coaster they would look at each other and say, "well, here we go." Every time.

Tomorrow morning I take three guitars (my Martin Dread, my Takoma Parlor, and Danny Gotham's Guild 12-string - thank you DANNY!) and a bunch of songs into Chris Rosser's Hollow Reed Arts Studio in Asheville. We'll be recording over three weekends and I hope to have a finished record in hand by April 2018.

I'm predictably nervous, but I'm stupid proud of how the last record (One Layer Down) came out, and I seem to recall Chris talking me off the ledge several times back then, so that's probably just how that's gonna go. I remember laughing a lot too. And coffee, lots and lots of coffee.

I'll post updates as the recording comes along. In the meantime, here's the kitchen table demo of "The Quiet Part".

Last for now, but certainly not least, this record is happening NOW instead of way later thanks to a generous grant from the North Carolina Arts Council.

Talk to you soon. Tomorrow, probably.

This project was supported by the N.C. Arts Council, a division of the Department of Natural & Cultural Resources. www.NCArts.org.

Andrew Delaney Is Coming to Town (no, it doesn't scan, so don't try)

Attention people who like songs: Odds are you’ll be seeing some facebook invites from me real soon.

See, Andrew Delaney is coming from Texas to North Carolina in early April, and us locals have two point five opportunities to see him play his extraordinary tunes live and in person. Andrew often travels with his band The Horse You Rode In On, but this time he will move the air with these songs solo right in front of your amazed face.

Your first chance (this is the .5 opportunity) is to show up in Hillsborough at WHUP for their Pass the Hat show around 6PM on Friday, April 7, where a) you’ll learn a lot about Andrew, and b) you’ll have to be vewy, vewy quiet.

On Saturday, Andrew and I will play at Berkeley Café in Raleigh. That starts at 8PM.

Finally, on Sunday, the brand-new Birdland(!) will host a house show for Andrew and myself as we swap songs for a couple of hours.

In person, Andrew is funny, fiercely intelligent, and funny, like a smart sandwich on funny bread. Don’t tell him I said that.

Here’s a taste of Andrew’s songwriting and sensibility. Strap in.

Relax Y'all. Amy Kucharik's Got This

And finally, the first New Folk Winner I got to know. Get her name right, y'all. It's kuh-CHAR-ick.

My first memory of Amy is behind the Threadgill Stage at Kerrville, where were both waiting to perform in the New Folk Competition. Amy could see I was beyond nervous and told me, "Somebody told me to just have fun with it." This, on her way out to the stage.

Amy had fun with it. She played two songs, and from where I stood backstage it sounded like this:

I thought, welp, here's me following one of the winners, then. And I was not mistaken.

Amy stayed on the ranch, but was a little scarce for a while. She was fighting a nasty bug (they were calling it Kerrbola), but whenever she could get vertical she found time to swing by the Rouse House, and we got to be good friends scary fast.

I say good friends. I mean, great friends. One example: In November of 2015 Amy saved my life, or at least my backside, when she picked me up at the Dallas Fort Worth Airport. I had left my wallet twelve hundred miles away and when Amy observed my features disappearing into whatamIgonnado, she administered a careful mix of pizza, beer, and stealth Karaoke to coax me off the ledge. Basically, "I got this."

How to describe Amy's music. Hmm.

Amy leads with the funny, but there's a sharp maul under that feather boa she swings around. Her songs can cut you off at the ankles while you're laughing.

Also: I want her foot tambourine on everything everywhere always.

There's more, but I'm out of time. She'll be here in two days.

Come see and hear what I mean this weekend here:

Let’s not bury the lead: I am proud to know Becky Warren, crazy proud to call her my friend, and obnoxiously proud to share several shows with her here in North Carolina next weekend.

My first impression of Becky Warren is indelible.

I missed Becky’s Kerrville competition performance (I’m pretty sure that she was off the ranch by the time I got there).  So by the following Sunday I was raring to hear her songs. I’d heard she was great, but I had no idea what to expect.

The following Sunday, Becky took the stage and slammed through an amazing set, including one song she hadn’t planned to play, “San Antonio” in honor of the gentleman who helped her get to Kerrville that day (she had car trouble on the way to the Ranch). My brain said, Um, wow?

After our showcases, we all headed back to the Rouse House (an amazing place to hang, hosted by Lindsay Lee and Deb Rouse). We pulled our guitars up on our knees and shook off the showcase nerves with some cover tunes. As I tried to remember the changes to Marvin Gaye’s “That’s the Way Love Is” Becky came right in and nailed the refrain, “That’s the way love is, sho nuff how it is”. I looked over and she matched my grin.

A minute or two later the mighty David Moss came by and ran down his arrangement of Paul Simon’s “Papa Hobo.” Becky knew that one cold as well, and I may have said out loud, “I think we’re going to be good friends.”

But I didn’t see Becky again until the following November, when the six Kerrville Winners played a series of shows in Texas, and I got to hear more of Becky’s brilliant songs. Her tunes hit you right up front, but they stand up to repeats, too. Sometimes they repeat in your head. In person, Becky has a lot in common with her songs. She's funny, kind, and wise.

Now it’s your turn. Becky is just now coming off a tour opening for The Indigo Girls, and NPR’s All Things Considered interviewed her about her ambitious new album, War Surplus. And she’ll be here in North Carolina March 3 – 5.

They say about some people, “he or she has this thing.”

Tom Meny has this thing.

Okay, so the first year I went to Kerrville I sat in the third row and watched all of the New Folk contestants, and it turned me to jelly. Jelly doesn't perform well, and I resolved that if I ever got to go back to Kerrville, I would avoid the competition until after the winners were announced, then catch everybody later in the festival.

In 2015, when Kerrville announced the 32 finalists I figured it couldn’t hurt to click on a few of the video links the Rouses put up on facebook. Just a couple, you know, to hear what was what.

The first video I clicked was Tom Meny playing his song “Say When”. I listened all the way through, then closed my laptop and walked away, thinking yeah, I’d probably better not check out any more videos if I plan on actually buying an airline ticket.  He’s that good.

Down in Texas I missed Tom’s set in the competition (like everybody else’s, by design), but l looked forward to hearing him around the campfires. Unfortunately for me, Tom skedaddled off the ranch, so I didn’t see him until almost a week later when he came back to swap some songs. Listening to Tom around the picnic table I found out he's a genuine, sweet, and very funny guy as well as a groove machine and next-level singer and songwriter.

And now you have a chance to hear Tom up close, because he's playing here in North Carolina March 3, 4, and 5 with Amy Kucharik, Becky Warren and me.

Here are the shows:

And here's an example of Tom Meny's art (don’t tell Tom, but I almost always tear up when I hear this song).

pre-caffeine, I am capable of shallow thoughts only

I don't like to look stupid, but this morning a thought so inane passed through my head it cracked me up.

Okay, first let me try to articulate the feeling:

Willis Alan Ramsey’s eponymous album has been on my musical periphery since I started buying my own records at age twelve or so, but it didn’t hit me square until just recently. I remember flipping past that forest green cover in my search for Beatles albums, and I saw Willis Alan Ramsey in people's collections over the years. The album just didn’t seem to be in their rotation at the time, so I don’t think I was ever exposed to the music, just the cover.

I bought my own copy of Willis Alan Ramsey on CD in 2003, listened the first cut or two, liked them and slotted the disc in my collection.  It sat like there like a time bomb until about two weeks ago when I got a hankering to hear “The Ballad of Spider John” and the album just flattened me. It seems to have crept into my past, like the music’s been with me my whole life, though I know that’s not true. It’s oddly pleasant combing through my musical memory looking for evidence.

So now, here’s how my brain offered up those thoughts to me this morning:

Uh, yeah genius, that’s usually how it works. Let's get some coffee. 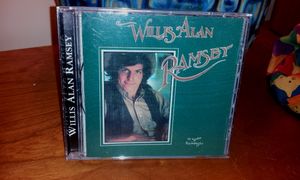 You are visitor number: 566

This is where I take stuff that's going round and round in my head and look at it on the page for a while. If it doesn't embarrass me too much I'll hit "post" (though that opens a whole new potential for embarrassment, I guess).