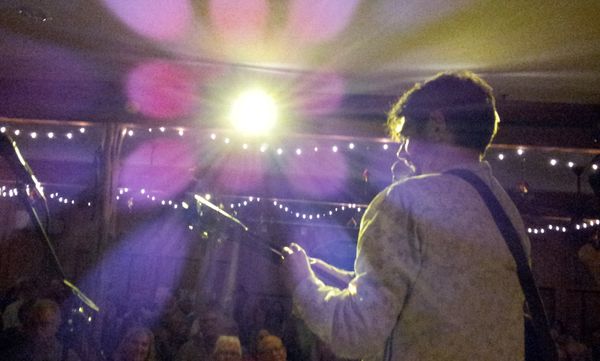 At age 44, Wes Collins and his wife Anita made a pact to become writers: she started writing fiction and Wes penned his first song. A few years later, they were both multi-award-winners in their fields. Collins more than makes up for lost time with songs so dense with ideas that a first listen only scratches the surface. Come for a haunting melody and some intricate fingerpicking and stay for the wit and deep literary intelligence. There is always more to find in a Wes Collins song.

Wes has played shows from coast to coast including: The Blue Bird Cafe in Nashville, TN; The Kerrville Folk Festival in Kerrville, TX; the Cary Theater in Cary, NC (opening for Dave Olney); and many more. He is a winner of the prestigious Grassy Hills New Folk Competition and a North Carolina Arts Council Songwriting Fellowship, and has been featured as a finalist in The Telluride Troubadour Contest in Telluride, CO; The Songwriter's Serenade Competition in Moravia, TX; and The Wildflower Performing Songwriter Contest in Dallas, TX.

Wes's recorded his third album Jabberwockies at Chris Rosser's Hollow Reed Arts Studio in Asheville, North Carolina, with special contributions by Ordinary Elephant and Jaimee Harris. Advance reviews for Jabberwockies are very positive and the album looks poised to surpass the success of his popular second album Welcome to the Ether.

“He credits many other singer/songwriters in his musical tent as inspiration, including Neil Finn, Gillian Welch, Bruce Cockburn and Patty Griffin, but Collins is well on his way to establishing his own voice as one we should value."

“One of the best songwriters in the Triangle’s vital Americana quadrant.”
- David Menconi